NuSpace services and refurbishes the rotodome turntable for the AWACS aircraft and is the sole-source for bearing assembly refurbishment on both the 707 and 767 versions of the AWACS aircraft. The AWACS bearing provides a very low friction rotating assembly and is able to withstand complex dynamic loads induced during flight operations. NuSpace produced AWACS bearings from the late 1970’s to the late 1990’s. Since the AWACS aircraft is no longer in production NuSpace now only conducts a service and refurbishing program. The AWACS turntable is a large and technologically advanced bearing, measuring 92 inches in diameter and weighing approximately 2,300 pounds. It supports the 30 foot diameter, six ton rotodome radar system that was designed and built by Boeing. The United States Air Force (“USAF”) is scheduled to fly the AWACS aircraft through 2027. Currently there are about 90 units in the field, consisting of 72 installs and 18 spares. Because of the critical nature of this product and the importance of the services NuSpace provides a special email address has been established to give customers instant access to senior management and program personnel: GBURCHFIELD@NuSpace.us 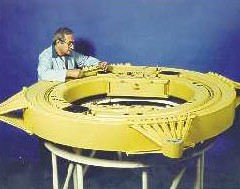 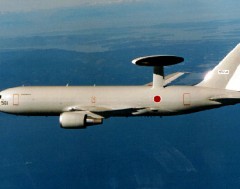